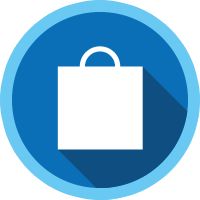 An RFQ accelerator (Radio Frequency Quadrupole) is a special type of particle accelerator which is used for the acceleration of particles at low velocity and usually from behind an ion source. The RFQ high-frequency structure has three essential functions: It takes over the transversal and longitudinal focusing for a high efficient RF acceleration.

Kreß primarily develops and manufactures 4-rod RFQ accelerators (RFQ = Radio Frequency Quadrupole). These plants developed by Professor Dr. A. Schempp at the University in Frankfurt offer a special benefit: They are significantly cheaper than conventional 4-vane RFQ, giving greater flexibility. In this way on one hand, the 4-rod RFQs allow adjustment of the high frequency during operation. On the other hand the modulated electrodes are interchangeable.

In recent years, together with the Goethe University in Frankfurt, Kreß has developed and manufactured several RFQ accelerators. These are increasingly replacing the older high voltage injectors, as they allow higher beam currents. At the same time the machines have more compact dimensions. For some years now, RFQ accelerators with downstream IH accelerators are being increasingly used in medical technology, in particular in tumour therapy using ions. Recently, large therapy centres for tumour therapy with ions have been established in Heidelberg, Marburg, Shanghai, Mailand and in Wiener Neustadt.

Working with the University of Frankfurt, Kreß has developed a new RFQ concept for the MedAustron therapy centre in Wiener Neustadt. These advanced RFQs have a rectangular cross section and are based on a modular design. Once assembled, the electrodes no longer need to be adjusted. A further benefit: The highly critical buncher system was removed from the RFQ resonator and relocated to a position behind the RFQ tank.

Lots of ideas from Kreß have caught on over recent years. The first 4-rod RFQ with a tank made entirely of aluminium features excellent thermal conduction and extremely good vacuum characteristics. This has been possible through the production of a single milled aluminium block. Also the entire cooling concept of the accelerator structure has been improved and an innovative way to fix the tuning plates to the electrode stems has been found. This system is protected by copyright law.

According to a GSI design, a resonant Schottky Cavity was delivered to Helmholtzzentrum GSI in Darmstadt. The subsequent vacuum tests in GSI's UHV lab were successful so that the device was ready for the detailed RF tests in the lab. This particular Schottky detector is of the cavity type which shows high sensitivity around its eigenfrequency and is suitable for use with lower number of particles in the storage ring. It is planned to place this cavity in the experiment storage ring ESR. Design of the cavity by Dr. Shahab Sanjari, GSI. 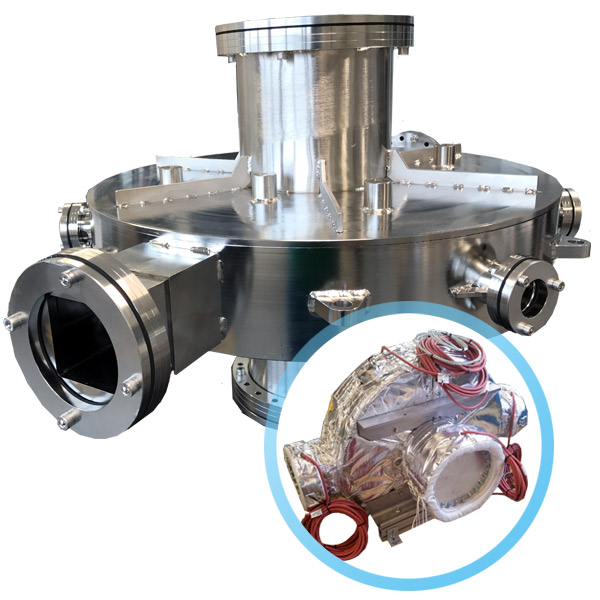 As a fundamental component of accelerating structures, a high-power RF coupler is a complex device which allows the transfer of power from the RF transmitter and the transmission line to the cavity. In addition to this RF function it also has to provide the vacuum barrier between the transmission line and the accelerator cavity. 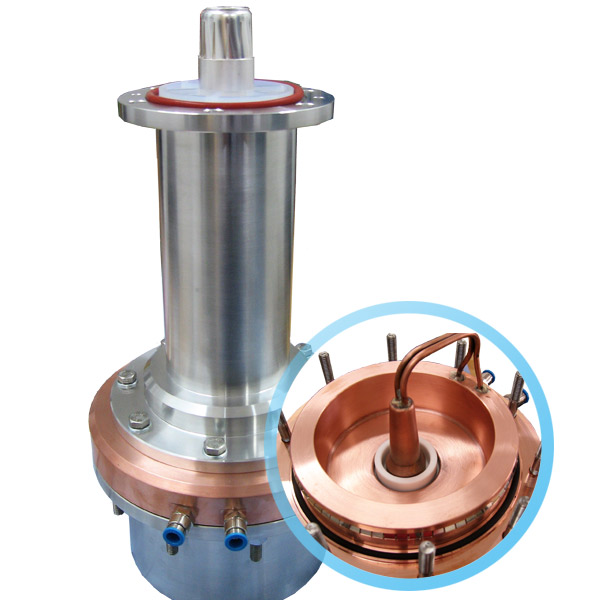 Calibration resonators are cavities for which you can calculate the resonance frequency from the geometric data. They are used for calibration, or determining the perturbance body constants of balls or small pipes made of ceramic. With these calibrated perturbance bodies, it is possible to accurately determine the field distribution of a high-frequency resonator which is fitted in a beam line. Three calibration resonators with elliptical, rectangular and round cross sections were manufactured for the GSI in Darmstadt. During production compliance with the mechanical tolerances of 0.01 mm and surface roughness Rz<2µ must be observed. 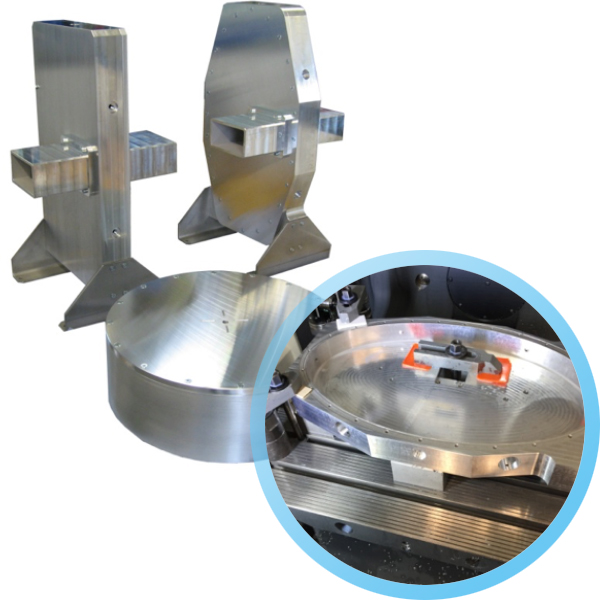 RF tuners or plungers are high precision, motorised linear UHV feedthroughs which can be used on accelerators to compensate for thermal frequency displacement when operating at high RF power.

These linear feedthroughs have a potentiometer for reading the exact position of the plunger in the vacuum chamber, a customer-specific stepper or DC motor, welded bellows and limit switch. 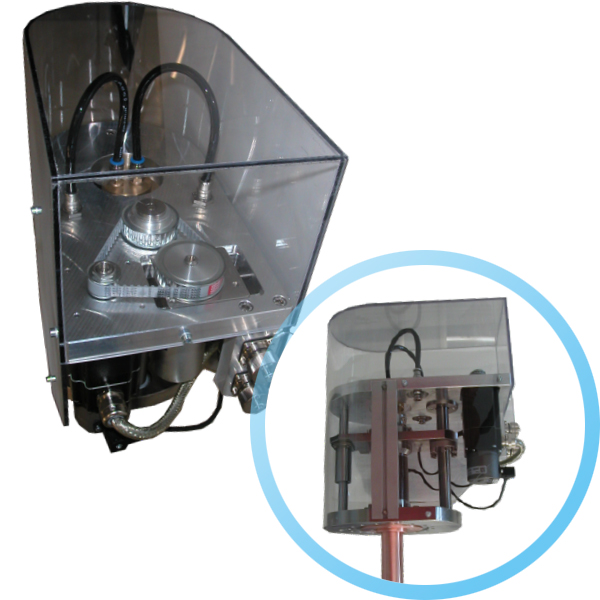 IH accelerators are very effective drift tube accelerators, which are usually used behind RFQ accelerators and accelerates the particles to higher energy. This IH accelerator is a display item, which was produced for the Institute of Theoretical Physics at Goethe University in Frankfurt. 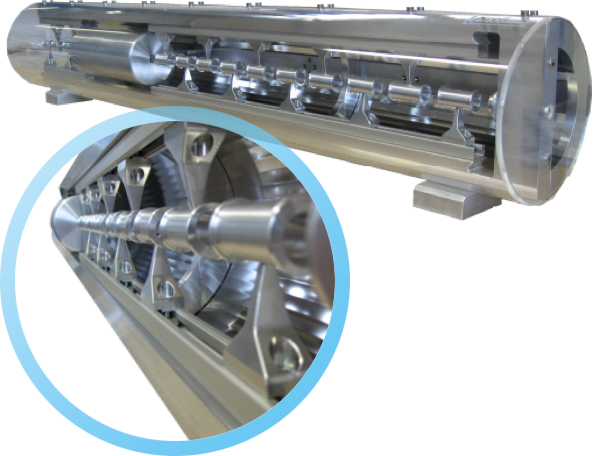 Very often a high-frequency quadrupole accelerator (RFQ) is used to accelerate protons. This prototype is a 4-rod RFQ which here works as a Ladder- RFQ.

The Ladder-RFQ is a development from the Goethe University in Frankfurt for the proton injector for the FAIR project at GSI in Darmstadt.

The benefits of this RFQ are the negligible dipole components even at high frequencies and the simple and cost-effective production in comparison with a conventional 4-vane RFQ.

The exact position of the rings with the electrodes mounted requires precise machining of all parts with an accuracy of 1/100 mm, so that all components fit perfectly and you therefore achieve the best level of electrical contact. 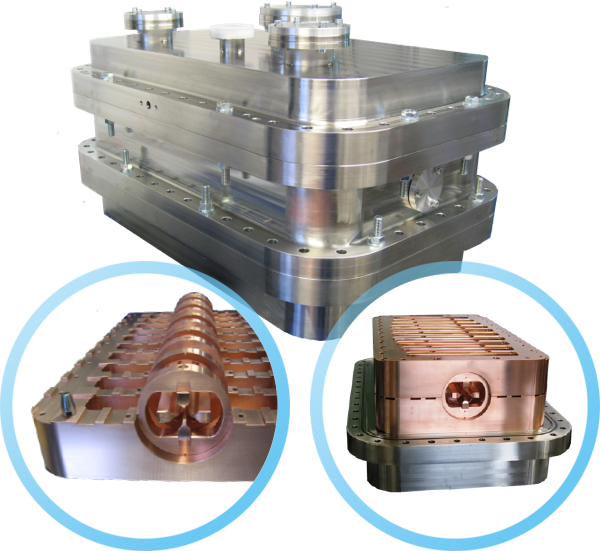 RFQ for LANSCE Project at LANL

This 4-rod RFQ will be used for accelerating protons in the injector for the LANSCE accelerator at the Los Alamos National Laboratory (LANL). The RFQ will replace a 40 year old Cockcroft-Walton accelerator. The calculations of the electric field distribution, the beam dynamics and the thermal loads were carried out by Goethe University and LANL. The mechanical design and the CAD design was carried out on our premises, working closely with both institutions. The RFQ accelerator was fully manufactured in our workshop. Carrying out all production steps in just one production operation guarantees the required high level of quality.

The galvanic copper plating of the stainless steel tank was carried out by Galvano-T, a specialist company qualified to carry out this work. 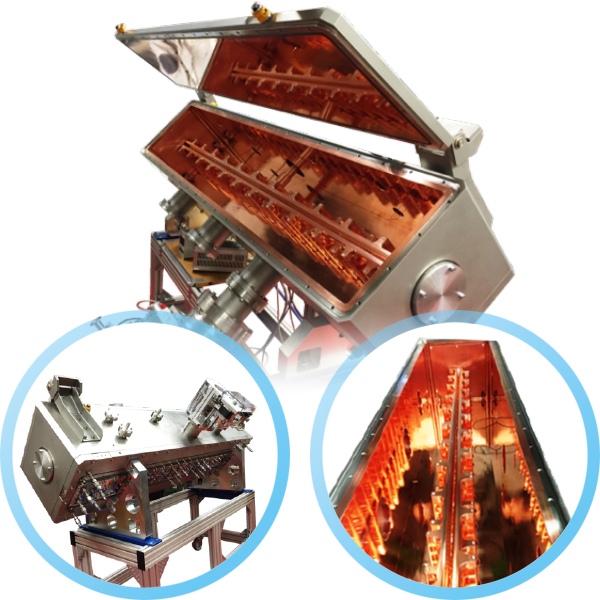 Over recent years tumour therapy with protons and carbon ions has become increasingly important in the medical field. This RFQ accelerator was newly developed and constructed for the “MedAustron” plant in Wiener Neustadt.

The accelerator has a rectangular cross section and consists of three basic elements (base plate, frame and cover). This construction enables simple and quick assembly of the parts. The accelerator structure is entirely installed on the base plate and means that subsequent adjustment after assembly is unnecessary. 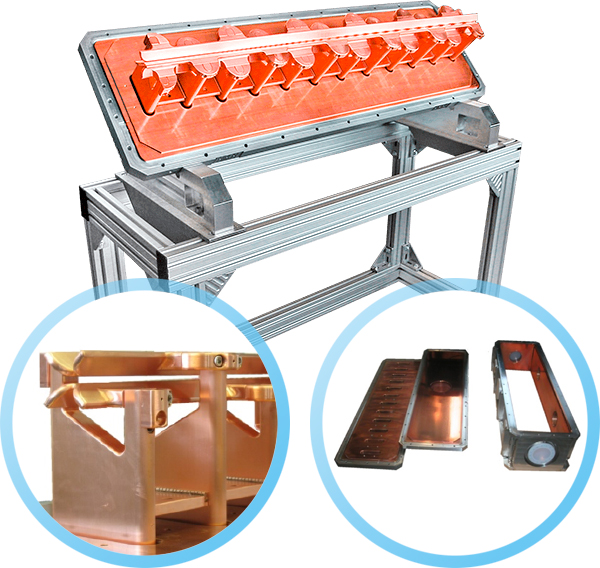 This RFQ accelerator is the first “4-rod type RFQ” with rectangular cross section, which is milled out of a block of aluminium. The accelerator structure itself (electrodes, stems and tuning plates) are made of OFHC copper.

All standard flanges are ConFlat (CF) flanges. Due to an innovative concept for fixing the electrodes and the electrode supports, it is no longer necessary to adjust the electrodes. In addition it is not necessary to galvanically copper plate the internal surfaces of the tank which is time-consuming and costly. 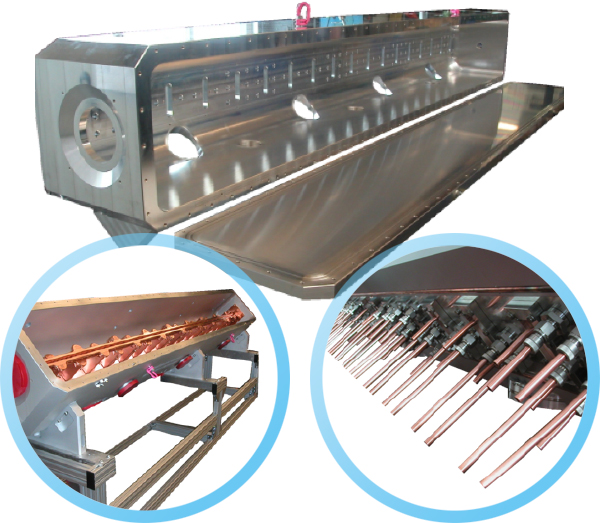 The resonator is made from an aluminium block which guarantees good thermal and electrical conductivity. The spirals and both drift tubes are made of SF-Cu.

The screen of the network analyser shows the resonance frequency of 201.25 MHz and a reflected RF power less than -40 db. Furthermore you can read off the loaded quality factor Q. 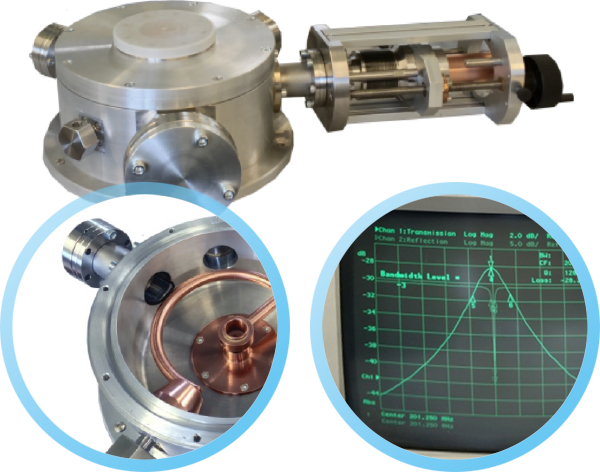 The RFQ was developed by BEVATECH OHG in Frankfurt for the Nuclotron-based-Ion Collider facility (NICA) in Dubna, Russia and produced by Kreß GmbH. 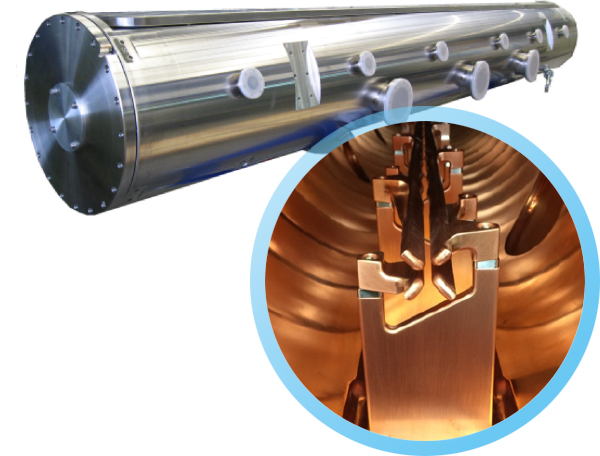 Spiral resonators are an excellent choice as buncher resonators, e.g. after an RFQ accelerator. The purpose of the buncher is to longitudinally compress the particle beam coming from the RFQ before it is sent into a further particle accelerator structure. This longitudinal focusing is necessary so that as many ions as possible from a particle pulse are accepted by the subsequent accelerator.

The tank of the spiral resonator is made entirely from a block of aluminium. All flanges are CF standard flanges made of stainless steel. The accelerator structure and the drift tubes are made of SF-Cu. Using aluminium means that you do not need to galvanically copper plate the tank which is a time-consuming and costly process. 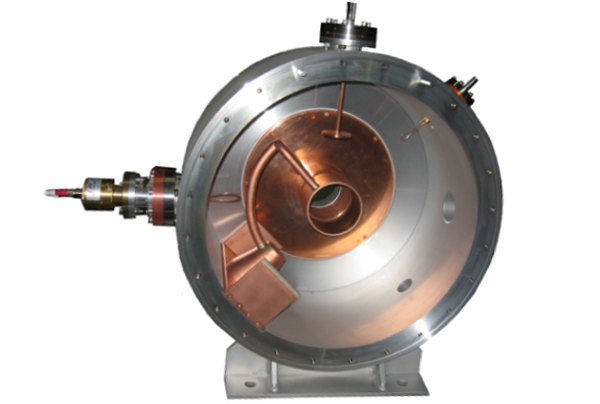